Has the Anti-War Crowd Gone Too Far? 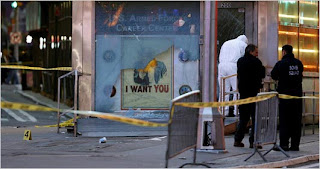 Police officers, one of them in a hazardous-materials suit, examined the military recruiting station in Times Square after an explosion damaged the front of the building early Thursday morning. (Photo: Chip East/Reuters)

Blast Damages Times Square Recruiting Station The New York City police just issued a statement describing the source of the explosion as an “improvised explosive device” and putting the time of the blast at 3:43 a.m. Subways and traffic are running normally through Times Square.

At first glance, the explosion seemed reminiscent, in its effects and timing, of two earlier blasts. At about 3:40 a.m. on Oct. 26, 2007, two dummy hand grenades that had been fashioned into crude bombs exploded outside the Mexican Consulate at 27 East 39th Street in Murray Hill, shattering windows. The building was not occupied and no one was hurt. At 3:55 a.m. on May 5, 2005, two crude but powerful explosive devices detonated outside the British Consulate at 845 Third Avenue in East Midtown, shattering windows and damaging a planter.

Just after 6:45 a.m., a handful of law enforcement officers knelt at the foundation of the recruiting station, smashing the carpet of glass shards with long-handled mallets. Two men in hazardous-materials suits stood above them, among more than a dozen
investigators from the city’s Police and Fire Departments, the Federal Bureau of Investigation and the Bureau of Alcohol, Tobacco, Firearms and Explosives. Police vans and squad cars ringed the scene, with clusters of detectives on street corners, paging through notebooks and talking on cellphones.

And while a spokesperson for Homeland Security wouldn’t comment on whether this explosion was related to terrorism the act in itself was a terror attack…an attack in my opinion against those very people who defend us against terror, the U.S. Military.

The left is already in a tizzy over the event worried that it’s going to cause a backlash against them. In the words of Kos Diarist Cool Blue Reason:

“Inevitably, we're going to start hearing about "left-wing terrorism" from the usual suspects in the media. And I'm guessing the drumbeat is going to be especially loud in this political environment.”

And you know what CBR, you are absolutely correct. Do you want to know why, the reason is because you are more than happy to surround your self and associate with those who openly hate and attack those who defend us. You support groups like Code Pink and MoveOn.org who call our soldier’s baby killers and murderers. You clap when “students” swarm and destroy recruiting stations and you support world leaders who actively call for the destruction of the very country that defends your right to do so.

How unhinged is the left over this they are even indicating that it was a right-wing attack against the recruiting station in order to drum up support to oppose the left. Can it get any crazier in the reality based community?

UPDATE: Allahpundit has the video.

Trackbacked / Linked by:
Has the Anti-War Crowd Gone Too Far? from Right Truth
H&I Fires 6 March, 2008 from Argghhh! The Home Of Two Of Jonah's Military Guys.
Make Incendiary Devices, Not War from Iraq War Today