Book Review: One Bullet Away 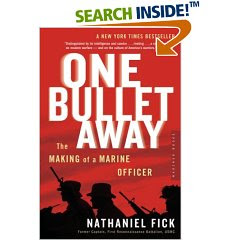 I finished reading Captain Nathaniel Fick’s book, One Bullet Away just as Michael Yon’s book arrived in the mail and once I picked that book up I had to finish it, which put this review off for a bit. One Bullet Away is Fick’s memoir of his time after joining the Marine Corp in the summer of 1998 up through 9/11 his units deployment to Afghanistan and then Iraq.

If you ever wanted to know what it takes to be a leader, Fick tells you in no uncertain terms. It isn’t candy coated or prettied up, he is honest and straightforward. Qualities it takes to be a truly effective leader. As he finds out on the first day: “Honor, courage, and commitment are the Marines’ core values. […] If you can’t be honest at OCS, how can the Corps trust you to lead men in combat?”

And lead men Captain Fick does, as a Weapon’s Platoon Lieutenant on his first day in the Fleets and into Afghanistan after 9/11 and then in Recon where he leads his men into Iraq on invasion day. Fick’s accounts are gritty and honest. You can feel the frustration that only military life can bring out in someone and at the same time you can feel the immense pride that comes with accomplishing something important.

In the end, Fick leaves the Corp he feels he was destined to belong to and concludes:

In June, one year after coming home from Iraq, I dragged a childhood friend to the Civil War battlefield in Antietam in western Maryland. I wanted to walk the ground. Among the split-rail fences and restored cannons, I saw RPGs and fedayeen. Where would I have put my machine guns to defend the Cornfield? How would Hitman two have assaulted the Bloody Lane?

The sun was warm on my arms, and bees buzzed through the tall grass as we meandered towards Burnside Bridge. There, on the afternoon of America’s bloodiest day, troops made three unsuccessful attempts to cross Antietam Creek under withering fire. We stood at the center of the span with our hands on the stones.

“No,” she replied. “They won, and Lincoln issued the Emancipation Proclamation. They freed the slaves, the way you freed the Afghans.”

“Think about the women under the Taliban and the poor Iraqis under Saddam,” she continued seizing a chance to change the subject. “You helped do so much good for so many people. Why can’t you take comfort in that?”

Staring down at the water, I measured my words, running through a justification I’d given myself a thousand times before. The good was abstract. The good didn’t feel as good as the bad felt bad. It wasn’t the good that kept me up at night.

“You sound so unprincipled,” she said, shaking her head. “Why can’t you find peace in what you and your men sacrificed so much to do? Why can’t you be proud?”

I took sixty-five men to war and brought sixty-four home. I gave them everything I had. Together, we passed the test. Fear didn’t beat us. I hope life improves for the people of Afghanistan and Iraq, but that’s not why we did it. We fought for each other.

And proud you should be Captain Fick.