In their own words:
Bill Roggio: Cross-border strike targets one of the Taliban's 157 training camps in Pakistan's northwest - Ten Taliban fighters, including a commander, were killed in a strike on a training camp and headquarters in South Waziristan. The compound was one of 157 Taliban and al Qaeda camps established in Pakistan's Northwest Frontier Province. Taliban commander Abdul Rehman, along with Islam Wazir, three Turkmen, and "several Arab fighters" were reported to be among those killed in today's strike. Some reports indicate up to 25 terrorists were killed in the attack. The compound is thought to have been run by Gulbuddin Hekmatyar's Hezb-i-Islami, a radical faction with close links to al Qaeda and Osama bin Laden. A Taliban training camp and a headquarters building were hit in the strike. (READ MORE)

Matel-in-Iraq: Vist to Anah - The mayor told us that Anah is a 5000 year old city built in 1985. The site of ancient Anah now lies under the waters of Lake Qadisiya. When the Hadithah Dam was built, the Iraqi government hired a French firm to design a new city on higher ground. The result was a pleasant new city, with wide streets organized on Cartesian grid, which can be appreciated even through the detritus of war. The first building was the mosque and the rest of the city was built around it. I was surprised to learn that the mayor did not have an accurate estimate of his city's population. He said that people were beginning to return and that the population was growing. Anah has long been known for its educated and effective workforce. These are the people who suffered most from the recent insurgency. (READ MORE)

ManryMission: Waiting in Kuwait - Last week, while Rick was in Kuwait waiting for his flight out of country, he called me in Mosul. He told me that SGM Franz, the NCOIC of the USACE reception station, was expecting my arrival in Kuwait and would take care of me. In fact, he said I would be a VIP. Having been through tent city here at Ali Al Salem Airbase three previous times, I didn’t know what could possibly constitute VIP status. I figured it might mean that my tent would be closer to the latrine than the non-VIP. I was pleasantly surprised to find out that USACE has a separate office building in Kuwait where they allow senior individuals to sleep instead of the tent city accommodations. The building even has male and female latrines, but I still have to walk to the shower. SGM F acquired the building for his use when USACE closed the Resident Office on the airbase. (READ MORE)

Major John: In Xanadu, er...Baghdad - did Kublai Khan... um, Saddam decree a...uh, mediocre pleasure dome decree: Where Tigris the, waste filled river, ran / through qanats dug by man / Down to a sun baked sea. / So twice five meters of trash strewn ground / With T-walls and checkpoints were girdled round: / And there were a couple trees, right with post-no-bills, / Where blossomed not many a pigeon-bearing tree; / And here were parking lots less ancient than the hills, / Enfolding overly sunny spots of mundanity. / But oh ! that shallow sluggish chasm which slanted / Down the green non-hill athwart an urban cover ! / A savage place ! as holed and disenchanted / As e'er beneath a waning moon was haunted / By woman wailing in fear of her Uday-lover ! / And from this qanat, with ceaseless turmoil not seething, / As if this earth in dust filled pants were breathing, / (READ MORE)

Kate Norley @ Blackfive: Back to Iraq- Return to Taji/Look what I found - Good ole ‘Castle Gate’… hearing of or passing through it again was never something I considered since my last visit in ’04. But after winding through checkpoints along a route all too familiar from before, I was back. Welcome to Taji! All of the sights and sounds of a place I had once feared to call home for several months of my deployment in OIF, bounded through me once again. This time though, after shaking off some of the initial jitters stemming from the realization that I was in fact back, I came across a sense of relief. After taking in several accounts from those currently serving in Taji, I discovered the general mood towards their mission was positive. Referring not only to the benefits of handling operations through a camp the size of Taji, but also the reports of significant drop in mortar and RPG attacks, the general consensus expressed was a feeling of being productive. (READ MORE)


Back and still writing:
Bouhammer: A video to watch - This is from the same embedded journalist that I have profiled videos from before, John D. McHugh of The Guardian. All of this was filmed in the Paktika district of Bermel. This is raw and honest footage and commentary from soldiers on the ground. They are conveying what just about everyone I knew was saying when I was there too. Everyday, not knowing, everyday unsure if a bullet, rocket, mortar, or IED was going to call you out. Every friggen DAY! Please take a few moments and watch this, it gets you closer to the real war then anything you will see on Main Stream Media (MSM). (READ MORE)

Bill and Bob's Excellent Adventure: French TV From Tag Ab - Our very own LTC Stone Cold, BSMV, emailed me a link today to a story that was produced by France 24 about Tag Ab and the neighboring district of Ala Say. For me, it was both exciting and eerie. I've been in all of those places. In the video, they visit the local ANP. I've sat in the stuffed chair that is in their new office. I was in that building before it was completed. I worked with those ANP, and I've met and talked with the Provincial council member who smuggled the reporters back into Tag Ab for their second trip. Firebase Kutschbach, which started out as a VPB* and then grew into Firebase Tag Ab and is now named for a Special Forces operator who was killed working out of the firebase shortly after the base was begun, has grown quite a bit in the past months since I've left Afghanistan. (READ MORE)

Summer youth program provides positive influence for teens - BAGHDAD – Youths from Taji teamed up Aug. 11 as part of a summer youth hire program to clean up the Taji Market, northwest of Baghdad. The youth program was kicked off by the embedded Provincial Reconstruction Team, 2nd Stryker Brigade Combat Team, 25th Infantry Division, Multi- National Division – Baghdad to give adolescents an appreciation their community and engage them in a good cause rather than leave them to outside influences. (READ MORE)

Southern Kirkuk Civil Service Corps Trains, Employs Citizens - KIRKUK — The official announcement of the establishment of the Southern Kirkuk Civil Service Corps was made during a commencement ceremony held at the Kirkuk Convention Center, Aug. 11. This program is similar to the 1930’s Civilian Conservation Corps established by President Franklin D. Roosevelt to combat unemployment during the Great Depression. (READ MORE) 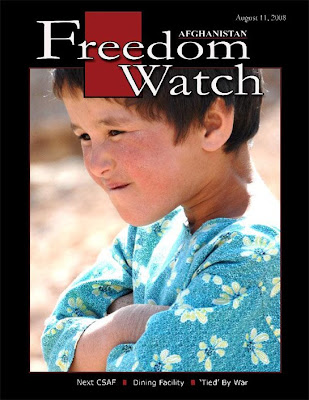 Labels: From the Front, Web Reconnaissance