In their own words:
Fearless 1st Marines’ blog: (VIDEO) Lifestyles of the rich and FOBulous - Cpl. Stephen McGinnis follows up his haircut blog by showing his and several of the Marines with Regimental Combat Team 1's living conditions. Enjoy (READ MORE)

Brad's Excellent Adventure: Boots on the Ground - Monday 29 September 2008 2200 - I am back in the AOR with a BOG date of 27 September. (BOG = “Boots On Ground”, i.e. the date you set foot in theater. ) My trip was smooth and uneventful. Commercial flight from Detroit to Dallas. Charter flight from Dallas to Ali Al Salem. Overnight stay in a tent at Ali, and then a C-17 from Ali to Al Udeid Air Base in Qatar, and then a short ride to my new home at Camp As Sayliyah. I have not flown out of Dallas before. They do things a little differently there – some I liked less than Atlanta, and some more. For one thing there was a 25 lb. limit on carry-on baggage that took me totally by surprise. At first I was pissed off, but then I just shrugged and readjusted. I took a few things out of my rucksack and put them in my pockets and laptop case, and then checked the ruck. I don’t like being separated from it, but I don’t really need everything in it during the flight. (READ MORE)

Bill Roggio: Pakistan engages the tribes in effort to fight the Taliban - As the Taliban and al Qaeda insurgency rages in northwestern Pakistan, the Pakistani government has stepped up its efforts to engage the local tribes to battle the extremists. The effort to gain the support of the Pashtu tribes in northwestern Pakistan was highlighted when General Ashfaq Pervez Kiyani, the Chief of Staff of the Pakistani Army visited the Bajaur tribal agency, where a two-month old offensive against the Taliban is still underway. Kiyani "expressed his satisfaction that local tribesmen have risen against miscreants and are fully supporting the Army," Geo TV reported. Miscreant is a term often used by Pakistanis to refer to foreign or al Qaeda fighters. "He reiterated that success in this operation was directly linked with popular support" in the tribal areas and the settled districts of the Northwest Frontier Province. (READ MORE)

Peace and War Times: Freedom, For Just One Weekend - After few weeks of continuous training, the opportunity to have a weekend off came, but with limitations of where to go. Yes, they told us, to go anywhere but not more than 50 miles radius. How can you limit soldiers of where they go, after being in lock down with continuous training? I seriously doubt that anyone follows those rules…. Yes, I was one among those that did not follow; I went to Philadelphia and Atlantic City! Despite that, the awful weather was threaten to mess up our plans, three girls and myself went to rent a car for the weekend. First stop, The Gallery Mall in downtown Philadelphia. This huge 5-story mall with an underground train station was too much for my taste, but I endured the 6 hours shopping spree for sure, among dealing with the local populous. It was pouring rain outside with heavy winds and despite that, people never stop coming to the mall, quite a view for an “economy in crisis” as the tabloids refer to. (READ MORE)

Rocinante's Burdens: Day 101. Being There - We released some more prisoners. During the release procedure, we ask around and see if anyone has a good reason to keep the guy locked up. Sometimes they do. This time, we discovered that there was another outstanding warrant for one of the guys we were releasing. So instead, we just transferred him to Iraqi police custody. More pics: The human face of Iraq. These little girls are cute as buttons. 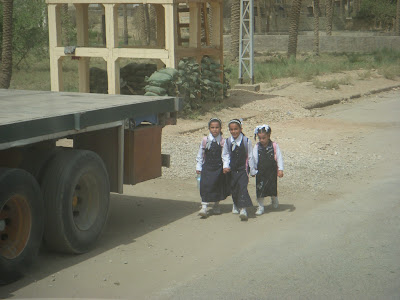 They are only about five years away from becoming plain. Then they will rapidly deteriorate into old hags in a matter of only 10 more years. Without a doubt, Iraq has the ugliest women (collectively) on the face of the planet. (READ MORE)

Big Tobacco: 5769 - I did not smoke while composing this. "I don't get while all of your holidays start at sundown. It's confusing." He says as we walk to the smoking area. "It's not confusing. I'm not confused. I guess you just have to grow up like that. Now a fat man that slides down a six-inch chimney. That is confusing." "So did that lieutenant blow your shofar yet?" "I'm not fucking that lieutenant," I say. "She's not like that." "Oh, come on, dude. She's always hanging out with you in the smoking area." "That doesn't mean we're fucking. She's new to smoking cigars and wants to learn about them." "Bet she's not new to smoking pole." "Dude," I respond. "She has a mustache. It's kind of a turn off. It would be like getting a blow job by your Uncle Walter." This sends my friend into fits of laughter. "Can I ask you something?" "What?" I ask. "Did you teach her about pairing cigars and food yet?" "Yeah, a little, why?" (READ MORE)


Back and still writing:
Maj Pain @ Blackfive: A letter from Afghanistan, from a hero - How do we really know what is going on in Iraq or Afghanistan? This solder gives his thoughts, in a letter that was recently published in the Crescent City (California) Triplicate, and I quote: “Letter from Afghanistan - Editor's note: This is the unedited version of the letter emailed to Triplicate reporter Adam Madison on Sept. 11 from Afghanistan by Capt. Bruno de Solenni of Crescent City. ‘Hi Adam, my name is Capt. Bruno de Solenni and I am writing you in regards to your article that I finally was able to read online. I really wasn't sure what to expect, especially nowadays with some of the crap that you read in the news. I will say that I was surprised and pleased that it wasn't over-sensationalized and you kept a good theme on the topic. I guess the main reason I am writing you is to thank you for your support and the point of view that you took on the article.’” (READ MORE)


News from the Front:
Iraq:
Soldiers detain suspect in Northern Salad Ad Din - NORTHERN SALAD AD DIN PROVINCE, IRAQ – Soldiers from the 5th Engineer Battalion detained an individual who had thrown a hand grenade at one of their vehicles in Northern Salad Ad Din Sept. 29. At approximately 11:a.m., Soldiers serving with the 509th Engineer Company, 5th Engineer Battalion, 555th Engineer Brigade, attached to the 3rd Sustainment Command (Expeditionary), were out on patrol when an individual threw a RKG-3 Russian HEAT hand grenade at one of their vehicles. (READ MORE)

Northern, central AQI networks further disrupted; 11 suspects detained - BAGHDAD – Coalition forces captured three wanted men and detained eight additional suspected terrorists Monday and Tuesday during operations targeting al-Qaeda in Iraq in and around Baghdad and Mosul. Approximately 80 km southeast of Mosul Monday, Coalition forces targeting AQI communication networks captured one wanted man believed to be a courier for the terrorist organization. The man, who identified himself to Coalition forces during the operation, is also believed to have connections to AQI communication lines coming out of Mosul. (READ MORE)

VBIED wounds 8 Iraqi citizens, including 1 child - MOSUL, Iraq – Eight Iraqi civilians were wounded when a vehicle-borne improvised explosive device detonated in the Al Maliya neighborhood of Mosul, Iraq, Sept. 29. Among the injured was a seven-year-old girl. Iraqi Police and firefighters provided immediate response and the injured citizens were taken to a local medical facility for treatment. (READ MORE)

Khalis Primary Health Clinic opens its doors in Diyala - DIYALA, Iraq – The Khalis Primary Health Care Clinic in Diyala province opened its doors to local citizens during a ribbon-cutting ceremony Sept. 28. The new facility, which has six doctors’ offices with adjoining exam rooms, an x-ray room, two dental exam rooms, a pharmacy, two treatment rooms and a classroom, is designed to provide basic medical service for up to 50,000 people and will provide advanced diagnostic and monitoring capabilities for acute and chronic illnesses as well as provide improvements in maternal and prenatal care. (READ MORE)

Three Significant Water Projects Ongoing in Erbil Province - ERBIL - "Approximately 40,000 people will go from two hours of water every three days, to three or four hours of water every day," said Younnis Talib, project engineer in the Erbil resident office. A short distance from the Iraq/Iran border, the Sakran natural spring water flows into a recently constructed catchment, where a 5.5 mile pipeline carries it to a 450 cubic meter holding tank. (READ MORE)

Coalition Detainee Operations Release More Than 14,000 - BAGHDAD — Task Force 134 Detainee Operations, in its continuous effort to fairly release rehabilitated detainees from the population, has released over 14,150 detainees so far this year. A significant number of the total released for the year happened during the holy month of Ramadan. As of the end of the fourth week of Ramadan, 2,404 detainees have been returned to their families and communities in recognition that they no longer pose a threat to Iraqis. (READ MORE)

School Renovations Provide Children New Opportunities in Rashid District - BAGHDAD — At the beginning of their school year, the kids of the Halwan school in Jari Village and Malaly school in Radwaniyah are not returning to the same schoolhouse they left before the summer break in southern Baghdad’s Rashid District. Multi-National Division – Baghdad Soldiers, partnered with Civil Affairs Soldiers and local Iraqi community leaders, worked to complete required renovations in time to re-open the schools as scheduled, Sept. 25. (READ MORE)
Posted by David M at 10:35 AM