In their own words:
Army Poet: Waiting - Resting, in your silent,/ And hard chambered world. / Insulated from knowing right or wrong, / Or seeing faces. / Just muffled sounds come to you, / And infrequent flashes of circular light, / Bouncing down grooved steel. / That is your view of the outside world. / Waiting to take your turn, / Running the curved spiral out into what we call life, / That’s where I live, and make the decision to free you. / Or not. / Wish I could make no judgments, / Just take the action, and fly. (READ MORE)

Back In the Army Now (at 54): REAL Live Fire!!!! - I was OK until the opening briefing for the Live Fire Shoot House began. Well actually I wasn't. As the 20 students filled the seats I started noticing half the class was wearing "Governor's Twenty" tabs on their shoulders. As I learned the day before, this patch is for the top marksmen in each state. We are the first class to go through the new Live Fire Shoot House in Pennsylvania. I thought I was one of 20 guinea pigs. Then the briefing started. A consultant/instructor named Phil flew in to teach the class. Phil gave us his resume. He is my age: 55. He enlisted at age 15 in the British Army. At 17-1/2 he became a paratrooper. At 24 he joined the SAS, the UK Special Forces. This affable veteran of liberating hostages and fighting terrorists in Northern Ireland and around the world then said, "You (meaning us in the chairs) are the best of the best. You will be the trainers who will run the Live Fire Shoot House." Oh Shit. (READ MORE)

Bill Roggio: Taliban: Baitullah Mehsud alive; US strike in North Waziristan - The Taliban denied that its commander in Pakistan died of natural causes. Baituallah Mehsud, the leader of the Movement of the Taliban in Pakistan and warlord in South Waziristan, was reported to have died yesterday of complications related to diabetes. The Taliban "media felt annoyed by some media reports about death of Baitullah Mehsud," Geo TV reported. Instead, the news agency said Baitullah "offered Eid prayers in some undisclosed area of Waziristan." Sources told The Long War Journal yesterday that the reports were false and designed to spread misinformation. The Taliban spokesman said the reports were false. (READ MORE)

Lt. Col. Paul Fanning: New center speeds Afghan army's growth - A new organization is improving the ability of the Afghan National Army to move capable forces from its training center to the operational commands. The sense of urgency for this new concept has only increased following the announcement of new plans to grow the Afghan National Army past the initial authorization of 82,000 to 135,000 in order to meet Afghanistan’s security needs. The Consolidated Fielding Center, based at the army’s Pol-e-charki reservation near Kabul, assembles new units from training center graduates and sends them forward as organized, staffed and equipped teams so corps commanders can concentrate more on operations and less on administration, training and logistics. The center takes individuals and organizes them for the first time into a unit and establishes a chain of command. (READ MORE)

Fearless 1st Marines’ blog: For the motivated, reenlisting is an Iraqi Police station away - KARMAH, Iraq - Sgt. John Owens, a 29-year-old section leader with Jump Platoon, 1st Battalion, 3rd Marine Regiment, Regimental Combat Team 1, held an array of occupations before finding his true calling as a U. S. Marine. But the Marine Corps was what he always wanted, so it came as no surprise that he swore his oath of reenlistment on Sept. 22, at an Iraqi Police station in the greater Karmah Region of Iraq. “I did everything from cooking to truck driving (before joining the Marine Corps),” the Dover, N.H., native explained. “I tried to find myself; tried to test the waters to see where I fit in. I always had an interest in the military.” (READ MORE)

Notes from Tommie: Secrets - In our lives there are always things that are not quite so out in the open, things that you don’t really want the entire world to know about. Each and every one of us has these at some point in our lives and most of us carry a few things to the grave. With so much pressure being constantly put on our youth to meet standards and to match up to the dreams of their parents and grandparents I find it more and more that they really don’t know their kids at all. Most of the time this isn’t even an actual effort, it just happens. Sometimes people keep these secrets for fear that the world won’t accept us for who we are and what out personal beliefs are per certain topics. Even I, who on most topics you ever could come up with is as open as a book, have some secrets that I’ve struggled with concerning letting family know about. Friends and certain individuals have learned things about me that in general aren’t that bad; (READ MORE)

Michael Yon: Compounds - Some days ago I visited the bazaar at Jalalabad, and took a bunch of colorful photographs and met many friendly people. Walking through Jalalabad, one could almost forget there was a war. But for the most part, this war is today being fought not in the cities, but the villages and small family compounds where most Afghanis live. Urban counterinsurgency can be incredibly dangerous, yet the population has a common life. City dwellers are dependent on civil services like water, sewage and electricity; they often have specialized roles in complex economies. Their feelings and opinions form a political aggregate which both the democrat and terrorist must heed. These elements of common life give the urban population a center of gravity which can reach a tipping point and shift, either toward the insurgent or the government. In Iraq, most people live in cities or towns. (READ MORE)


Back and still writing:
Bill and Bob's Excellent Afghan Adventure: Pictures From Northern Kapisa - While we spent a great deal of time in the Tag Ab Valley, we also worked with the ANP in northern Kapisa Province. On our trips into the northern districts, I took some pictures of the much more peaceful and orderly life there. 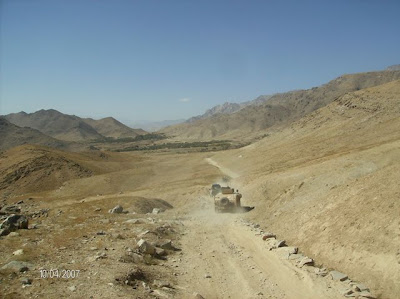 Bouhammer: Smell that? Its hitting the fan - Since the first of this year I have been saying over and over that 2008 would be the worst year ever in violence for Afghanistan and its coalition partners. It did not take a glass ball or a Dionne Warwick psychic to figure this out. Every year since 2005 had gotten worse and worse with the number of US deaths in Afghanistan. The enemy was being beat down, killed, and run out of Iraq…so they had to go somewhere to fight the infidels. Twenty-two coalition members died in the first two months of the year, and those are the quietest times of the year in the way of violence. Last month we surpassed the most Americans killed in one year and there was still three months left. I am hearing from multiple sources in country, some of which had been to Afghanistan before, and they are all telling me that the attacks are more coordinated, more deadly, and more brazen in execution of the attacks. (READ MORE)

Pat Dollard: There’s A Man With A Gun Over There - With Video - The U.S. military works hard to transition the Sunni Awakening’s Sons Of Iraq into peacetime. A good idea since 100,000 unemployed, highly trained and combat tested men with AK’s could stray to the dark side without fair options..Times Of London: “Mr Ahmed, 60, who goes by the name Abu Hiba, used to be a football coach and sports club manager. Now he is in charge of 51 militiamen in the Diyala river valley – a detachment of the Sons of Iraq, the Sunni militia set up and paid for by the US military to kill or capture al-Qaeda militants. General David Petraeus, the US commander who oversaw President Bush’s troop surge strategy, has been given much of the credit for quelling the violence in Iraq. As far as Abu Hiba is concerned, however, he and his men are responsible for peace in Diyala. ‘You couldn’t even come to this area if it wasn’t for us, the Sons of Iraq,’ he told The Times.” (READ MORE)


News from the Front:
Iraq:
Court-martial is told of bloody Fallouja battle - A pretrial hearing Wednesday at Camp Pendleton got a brief reminder of the bloody nature of the Marines' battle with insurgents in Fallouja in November 2004. Defense attorneys for Sgt. Ryan Weemer want to be able to call Sgt. Maj. Brad Kasal as a character witness during the court-martial. Weemer is charged with murder for allegedly killing a prisoner Nov. 9 in the first hours of the battle. Kasal was not with Weemer that day, but the two were among the Marines three days later who fought what has become known as the battle of Hell House. (READ MORE)

Coalition forces detain six suspected terrorists in Mosul, Baghdad - BAGHDAD – Al-Qaeda in Iraq networks in Mosul and Baghdad were dealt another blow Thursday, as Coalition forces captured two wanted men and detained four additional suspects believed to be associated with the terrorist organization. Coalition forces acting on tips from individuals already in custody captured a wanted man and detained two additional suspects during an operation in Mosul. The wanted man is believed to be developing technology designed to impede Coalition forces’ ability to detect car bombs and other improvised explosive devices. (READ MORE)

VBIED leaves 4 dead, 15 wounded at Balad mosque - BALAD, Iraq – A vehicle-borne improvised explosive device exploded in a parking lot at the Sayid Muhammed Mosque in Balad, killing four and injuring 15 Iraqi citizens as large crowds gathered for a celebration of the holiday of Eid al Fitr Oct. 1. Iraqi Security Forces thwarted the attacker from getting closer to the mosque and causing more casualties. There was no damage to the mosque. The wounded were immediately evacuated to a hospital inside the city and a nearby Coalition hospital. (READ MORE)

Morning prayers heard again in Samarra shrine amidst peace - SAMARRA, Iraq – After two years of silence enforced by sectarian violence, prayers of Shia worshippers were echoed today in Samarra’s Maqam Ghaybat Shrine, which is co-located with the ancient Al Askari Shrine. Shia faithful gathered in the morning Oct. 1 to pray to commemorate the end of Ramadan. “Hundreds of people were at the Mosque for the Eid celebration,” said Maj. Gen. Rasheed Flahe Mohammed, Samarra Operation Center Commander, who’s a Shia himself. “Today we are celebrating in the mosque. (READ MORE)

Officials open Al Naitakeen school for girls in Baghdad’s Al Amin area - FORWARD OPERATING BASE RUSTAMIYAH, Iraq – Schoolgirls, their parents and New Baghdad government officials celebrated the opening of the Al Naitakeen primary school for girls Sept. 29 in the eastern Baghdad area of Al Amin. A ribbon-cutting ceremony was held to commemorate the opening of the school, which caters to underprivileged girls, which will open its doors for students and teachers to begin a new school year in October. (READ MORE)