In their own words:
Lance Cpl. Melissa Tugwell: A Lioness on the Prowl - At the Garma Checkpoint: After completing training, I was assigned to a security checkpoint in Garma, Iraq, with fellow lioness Seaman Christina Follmer. We fell under the supervision of the infantry staff noncommissioned officers of Weapons Platoon, 1st Battalion, 5th Marines. I’ve found that our mission as lionesses is different than the mission carried out by the first female Marines who manned security check points in Iraq. With Seaman Follmer, I have spent most of my time at the Garma checkpoint teaching and supervising Iraqi women as they search the women coming through our security point. This is another aspect of the recent turnover of security responsibilities in al Anbar Province to the Iraqi people. (READ MORE)

Hilla's Histories: Cholera, Elections and Security Turnover - It has been a busy time in Babil the last two weeks. The cholera outbreak, which was heavily concentrated in Babil, appears to have stabilized. On September 24, the Iraqi Council of Representatives (Parliament) passed legislation paving the way for holding provincial elections no later than January 31. In addition, preparations continue for the handover of lead responsibility for security from Coalition to the provincial authorities, which Iraqi officials expect to take place in the coming weeks. Cholera: WHO has a website with information on the cholera outbreak, which began in July and picked up in August and early September. See http://www.int/csr/don/2008_09_29c?en/index.html. Babil accounts for 200 of the 340 confirmed cases. The outbreak appears to have stabilized and, notwithstanding all that has been written in the media about a cholera "epidemic" here, the fact remains that only two persons have died in Babil Province... (READ MORE)

City Girl: Who knew it would be this hard? - For whatever reason, I have had a hankering to write something beyond CPT G updates these past few weeks. Due to time constraints (who knew that first year teachers did not have lives?) and lack of material, I have refrained from posting anything. Tonight, however, I found a few minutes to sit down and reflect on my life recently. Here are the thoughts and emotions that have helped me get through yet another week of this deployment: This past week I spent a good amount of time talking about CPT G and the deployment with spouses and parents of soldiers serving in the Middle East. Naturally, it has made this an especially emotional week. It saddens me to hear that throughout the various branches of the military, in various parts of the country, and various stages of deployments, spouses, fiancées, girlfriends, boyfriends experience the same feelings of loneliness and isolation. (READ MORE)

Bill Roggio: Suicide bomber targets chief of Pakistani Pashtun political party - A suicide bomber killed five Pakistanis during an assassination attempt on the leader a secular Pashtun political party. The bomber targeted Asfandyar Wali Khan, the chief of the Awami National Party, in his home in the settled district of Charsadda in the turbulent Northwest Frontier Province. The attack occurred as Khan was hosting celebrations in a guesthouse next to his home for Eid-ul-Fitr, the holiday at the end of Ramadan. The suicide bomber was shot by security guards as he attempted to reach Khan. "The suicide bomber tried to pass from the security scanner avoiding a physical search. Two security guards grabbed him but he tried to get away," Provincial police chief Malik Naveed told Geo TV. "Then he was shot and as soon as he fell on the ground he blew himself up.” (READ MORE)

Navy Gal-Off To IRAQ: It's coming..... - It's just around the corner, lurking, poking it's head out just to take a peek. It's glowing in the distance like a giant warm sun just waiting for me to round the corner and cast it's glow onto my face. It's coming. The end of this deployment is coming and I can finally taste it, feel it, sense it, smell it. It's coming........ (READ MORE)

Rocinante's Burdens: Day 104. Baghdad - We were awakened to gunfire all around our camp this morning. No one got hurt. It was celebratory fire, like the 4th of July, to celebrate the end of Ramadan. Then we took a trip to Baghdad. Three hours each way by truck. No one tried to blow us up, shoot, stab or call us names that would hurt our feelings. Pictures: This is a common road sign on a major highway. It is just like you would see in the USA except with more bullet holes (road signs in the rural South excepted). Of note, the name of the Airport in Baghdad is Bagdhad International Airport (BIAP for short), not as has previously been reported "Bush International Air Port". 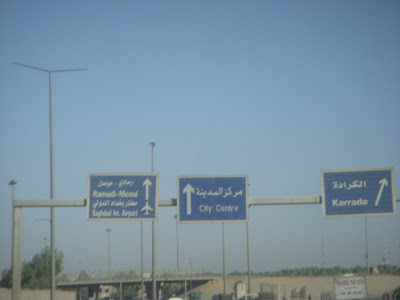 Big Tobacco: It’s a Long Story - I wrote this while smoking a La Gloria Cubana Wavel. Author's note: This was written when I was still a platoon sergeant. A few days ago: I am standing on the rifle range. Its blazing hot out and we are in full body armor. I’ve assembled some of my platoon for some rifle range time. I am in front of the formation, giving my small platoon a quick safety briefing before we walk the twenty meters to the firing line. As I address the formation, SFC Rocksalt, the prison guard from “Black and Blue,” walks directly between me and my formation on his way to the range. I fall silent. Corporal Blade exclaims: “Now that was gansta.” For those of you who are not in the military, walking in front of a formation is considered disrespectful. But walking BETWEEN a leader and his formation is an act of disrespect that I have never seen in my 14 year career. And by the manner that SFC Rocksalt was walking, he did it intentionally. “Hey Sergeant Rocksalt,” I shout. “How ‘bout next time you walk behind my formation!” (READ MORE)

Zen Traveller: My Head Hurts - I treat a lot of headaches. That seems to be the chief complaint of our local Iraqi staff, but they describe it in such debilitating terms that it often makes me suspicious. A a single aspirin or Tylenol later and they're good as new, generally within ten minutes, which is surprising as the absorption rate is closer to fifteen minutes. Today was a sprained knee, so bad that the staff member said, wincing and moaning, that he couldn't walk. I told him to ice it; a half an hour later he's running around with no signs of injury. It's a miracle!! The truth is that I found many Iraqis to be attention seeking. All they want is someone to listen to their near-death complaint, give them something that looks like medicine and they're merrily on their way. I'm not sure what the cultural reason is for this. (READ MORE)

Tragically Famous: A new chapter is in the making... - I woke up in an unknown, mildly foreign place today. The alarm on my phone was set for 0530. The ring tone echoed familiarly in the room. Ah, it's time to get up. It's time to get moving. I think. I didn’t have a patrol to go to. I didn’t have planning to attend. No time lines were present to abide by. I am in an undiscovered world. I have lost the rigid structure that kept me busy for ten months, and misplaced the drive of our next patrol being ‘at a moment’s notice.’ It scares me greatly. Welcome home, Tony. After re-reading the last paragraph it almost seems like this would be an excellent introduction for my journal entry for being on leave. But it’s not for leave. It’s for work. It’s for my new home away from the last four years of my military experience. It’s a new unit, a new face on this war, and a new chance to do something a bit more clandestine. Or is it? (READ MORE) 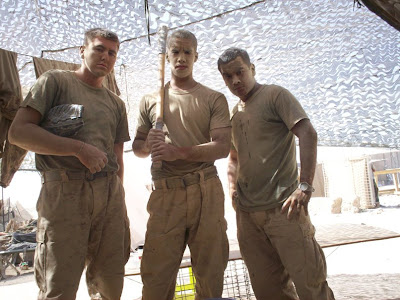 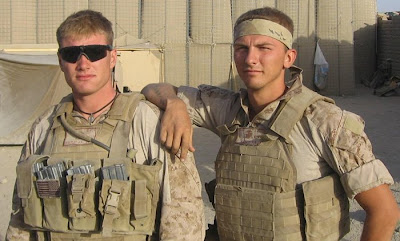 News from the Front:
Iraq:
Hawaii politicians call for Medal of Honor for Sgt. Peralta - The congressional delegation from Hawaii has joined several Southern California representatives and a Latino veterans group in calling for President Bush to overrule his secretary of Defense and award the Medal of Honor posthumously to Marine Sgt. Rafael Peralta. Defense Secretary Robert Gates turned down the Marine Corps' recommendation for Peralta amid contradictory evidence about whether he was already clinically dead when an insurgent hurled a grenade at Marines during the fight for Fallouja in November 2004. (READ MORE)

Fertilizer distribution sprouts self sufficiency - FORWARD OPERATING BASE KALSU, Iraq – Iraqi farmers in Babil province received 11 truckloads of fertilizer donated by the Government of Iraq and delivered by Coalition forces Sept. 30 and Oct. 1. “We are applauding this action,” said Sheikh Hussain Ali al-Sam, who will help distribute a portion of the fertilizers. In all, the headquarters battery delivered more than 5,500 bags, which will benefit more than 2,000 farmers in the Jabellah area and surrounding regions. (READ MORE)

ISOF prepares for future without U.S. forces - BALAD, Iraq - The 6th Battalion, 1st Iraqi Special Operations Forces Brigade commandos in southern Iraq are learning all they can about counter-terrorism and counter-insurgency techniques from U.S. Special Forces Soldiers. Through a foreign internal defense partnership, the U.S. Special Forces detachment has teamed up with ISOF to teach them how to conduct kinetic operations and sustain security in Iraq. (READ MORE)

U.N. evaluates Baghdad IDPs - BAGHDAD –Worldwide, tens of millions of people are classified as Internally Displaced Persons (IDPs), but Iraqi Security and Coalition forces have made resettlement and reconciling Iraq a main priority. The United Nations High Commissioner for Refugees (UNHCR) team based here toured the neighborhoods of northwest Baghdad Sept. 28 to evaluate the thousands who have been forced from their homes. (READ MORE)

New Equipment Boosts Iraqi Company’s Transformer Production - CAMP VICTORY — Diyala Electrical Industries recently received two machines to help the Iraqi owned company get closer to meeting its production demand. The machines are a benefit of a partnership between Diyala Electrical Industries and the United States government and are needed at the company for production of industrial sized electrical transformers for power lines. DEI is the only company that produces transformers in Iraq. These are used to help transport electricity through power lines throughout the country. (READ MORE)

Driving through Iraq, to Samarra - On a journey through a region of Iraq noticeably safer than it was even several months ago - but still not free of hazards - Mohammed Hussein describes his 70-mile road trip through the political, sectarian, tribal and religious checkerboard that is modern Iraq. And the Samarra which he found at his destination, but did not recognize. (READ MORE)
Posted by David M at 9:40 AM